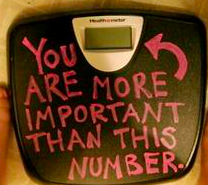 A major component of the Whole30 that has been difficult for me is the concept of not weighing yourself for the entire 30 days. I enjoy this concept not because I want to stop weighing myself but because of the reason given in It All Starts With Food, the makers of the Whole30 don’t care if you loose weight, this is not a weight loss program, it is a program to become more healthy and aware of the food we are putting in our body, And yes as a result of this you will loose weight, but this is also not always reflected on the scale, sometimes you are loosing inches off of your waist and not moving in pounds because you are gaining muscle. I have been working hard to focus on the weigh I feel and my body composition rather than simply the number on the scale tells me.

With that said it is day 28 of my Whole 30, we are finished on Sunday and I have some major( for me) non scale victories I would like to share before Monday when I jump on the scale and share with all of you the actual numbers, but first forget the scale lets see what has happened in the last 30 days!

First of all I have been trying to “become a runner” for about 4 months now, I started out walking for a minute and than running for a minute, at this point in January I found myself staring at the count down from about 30 seconds on, which means I could only run for 30 seconds comfortably. By the time I started the Whole30 I was able to run for about 3 minutes, still pretty uncomfortably, but I could do it.

This happened last week! Over 2 miles in 30 minutes!  I accomplished this by running for 10 whole minutes!! Then walking for 2, running for 5 minutes and walking for 5 and then running for 1 or 2. It was not even it did not follow a prescribed running plan, but it was amazing to me! I probably could have kept going after 10 minutes in the beginning too! 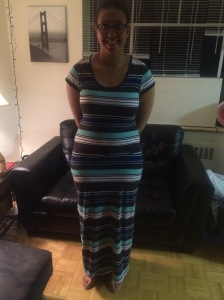 Then there are these pieces of clothing! The white shirt on the left is a medium and it is a littler loose! I am also wearing my favorite pants in that picture, they are way too big for me now, I am waiting to buy new ones next week.

The dress on the left was a dress I purchased last summer and then rarely wore it because I always felt like I was just busting out of its seams. While I still would like to look a little better in it. I can see my curves again and I was comfortable wearing it out of the house. 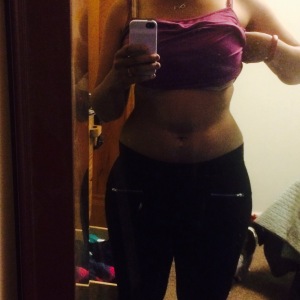 And lastly there is this! NO MUFFIN TOP! See ya later flab! I could have taken a picture of a pair of pants that were slightly big on me before and by week two they were literally clown pants that I had to get rid of but I threw them out already.

I am very excited to see what the scale says on Monday, but looking back over the past 30 days I am more than happy with these non-scale victories!

Don’t always focus on the numbers, we are so much more than numbers. The Whole30 has taught me a new outlook on my body composition and the food that is playing a role in that. Even though it has been hard, the last week seemingly the hardest (surprising for me too) it has been worth it!

Mr. and I are going to transition into what I fondly call Pretty Much Paleo after a cheat week from our whole30, I will let you know how it goes, but can’t go back to how things were before now!

What non-scale victories do you cherish? What was the first piece of clothing that made you stop and think “this doesn’t fit” or when you could put on those “skinny” jeans or dress or skirt or shirt and it fit?

We all need those small motivators to get us through a lifestyle change!